Join Date: Nov 2016
Location: Mississippi
Posts: 529
Mentioned: 1 Post(s)
Tagged: 0 Thread(s)
Quoted: 170 Post(s)
(Thread Starter)
Suzuki bringing back the Katana
Kind of a let down it is nothing more than a GSX with different bodywork.

I own the original 1982 GS1000SZ so to me this is a marketing fraud based on the original name only. Nothing cutting edge about this bike. Even the regular bars look out of place on it. Original has clip-on bars.

Join Date: Nov 2016
Location: Mississippi
Posts: 529
Mentioned: 1 Post(s)
Tagged: 0 Thread(s)
Quoted: 170 Post(s)
(Thread Starter)
Quote:
Originally Posted by gixxerjasen View Post
To be fair, a GSX with different bodywork is better than the Katana 600/750 that was released in the 90's. Absolutely nothing cutting edge about those gutless wonders. I did own the 600 though, and it was a great beginners bike.
Those were junk. I was referring to the original bikes 82-83 those were cutting edge for the day.
gixerhp and WhiteRR like this.
2016 GSX-S1000
roy826 is offline
Quote Quick Reply
post #4 of 73 Old 10-02-2018, 10:29 AM
mike d
Senior Member


Join Date: Apr 2016
Location: Ontario
Posts: 263
Mentioned: 0 Post(s)
Tagged: 0 Thread(s)
Quoted: 106 Post(s)
Quote:
Originally Posted by roy826 View Post
Those were junk. I was referring to the original bikes 82-83 those were cutting edge for the day.
What was wrong with them? (other than the looks)

It was a 600cc inline 4 with decent power, wasn't it?
Take off the "decent power" and you've nailed it. They were very low tech, down on power, and ignored by the aftermarket community compared to GSX-R's, Ninja's, etc. They were great dead simple beginners bikes though and I loved mine till I tossed it down the highway. After that I bought a 2000 CBR 600 F4 and later got a chance to ride a friends new to him Kat 600. Going back after riding the F4, that Kat was a turd and a piece of junk. But if it's all you've ridden then it's awesome. I learned a lot on mine both riding and wrenching and it was a good cheap bike.

I only was pointing out that the last iteration of bikes to wear the Katana name were more of a disappointment to the Katana fans than this one will be. This is definitely a step back in the right direction. Might not be fully back on track but getting there.

And a shot of the original that I took at Barber Motorsports Museum. 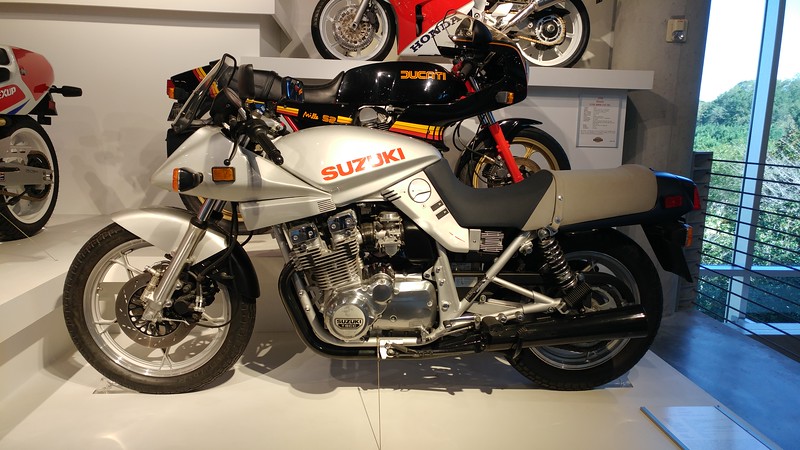 They weren't meant to compete with the GSXR or other super sports, they were more sport touring bikes with upright ergonomics.
CaptainSlow is offline
Quote Quick Reply