Non Starting GSXS
I havent started my bike for a few weeks due to it being off the road. Went to start it today and nothing happened. Dash lit up headlights worked but press the starter and no response. No sound of fuel pump working, press starter and headlight goes off but nothing else happens. Checked all the possibles inc sidestand clutch lever gearshift lever in neutral. Only thing i noticed is the dash had CHEC on bottom left corner, other than that nothing. Battery checked and 13.2 volts so not that. Any ideas ? Ta, Del
"I arrive. I see... is possible. I go fast. I WIN!" - Valentino Rossi
Delboy777 is offline
Quote Quick Reply
post #2 of 8 Old 04-13-2019, 02:24 PM
Beaker
Senior Member

Join Date: Sep 2018
Location: Lincs UK
Posts: 176
Mentioned: 0 Post(s)
Tagged: 0 Thread(s)
Quoted: 39 Post(s)
Quote:
Originally Posted by Beaker View Post
Kill Switch?
Agreed, sounds exactly the same as when I was deliberately trying to turn the engine over with the kill switch on to stop it firing following an oil change. Used to turn over on the blade but zip from the gsxs.
Delboy777 likes this.
Barstewardsquad is online now
Quote Quick Reply
post #4 of 8 Old 04-13-2019, 04:02 PM Thread Starter
Delboy777
Senior Member

Join Date: Mar 2019
Location: Elgin Moray, Scotland
Posts: 105
Mentioned: 0 Post(s)
Tagged: 0 Thread(s)
Quoted: 22 Post(s)
(Thread Starter)
Quote:
Originally Posted by Beaker View Post
Kill Switch?
That kind of confirms the thoughts of the dealer i took it to today in Aberdeen. The bike is two years old this month but has a three year warranty, so i recovered it myself to the dealer this afternoon and although the mechanic was not there the other lad reckoned it was the kill switch gone faulty. They say they have never had one go on a Suzuki but there is always a first i suppose. Ive left the bike with them and they will have a look on Monday when mechanic is back. Repair is being done under warranty so not too bad. Luckily i have access to transport to take it to dealer. When i find out i will re post on this thread what the result was.
Beaker and Barstewardsquad like this.
"I arrive. I see... is possible. I go fast. I WIN!" - Valentino Rossi
Delboy777 is offline
Quote Quick Reply
post #5 of 8 Old 04-15-2019, 02:14 PM Thread Starter
Delboy777
Senior Member

Join Date: Mar 2019
Location: Elgin Moray, Scotland
Posts: 105
Mentioned: 0 Post(s)
Tagged: 0 Thread(s)
Quoted: 22 Post(s)
(Thread Starter)
Ok so i now know what was wrong with the bike and why it wouldnt start. A simple mistake on my part and a lesson learned. Story is when i bought the bike it had been fitted with heated grips that were wired directly to the battery, i dont like that its a fire hazard AFAIC. So i would wire them in through a relay to protect the battery and in doing so i was looking for a switched live to activate the relay. Taking a look beside the diagnostic plug i came across a connector with a blanking plug fitted to it. Removing the blank i discovered two switched lives there so decided to use one of those to feed the relay........BIG MISTAKE !! It turns out the blank has a bridge inside it that i didnt notice and when the plug was removed it cut of the feed to the ECU !! No wonder the bike wouldnt go the ecu was getting no signal to waken up. Moral of the story, dont interfere with plugs that seem to do nothing. Fitted blank back on, and bike fired up first time. !! Luckily the dealer is doing through the warranty otherwise it would have been a VERY expensive mistake on my part. Be warned dont remove that blank from the connector !!
mike d likes this.
"I arrive. I see... is possible. I go fast. I WIN!" - Valentino Rossi
Delboy777 is offline
Quote Quick Reply
post #6 of 8 Old 04-15-2019, 03:07 PM
mike d
Senior Member 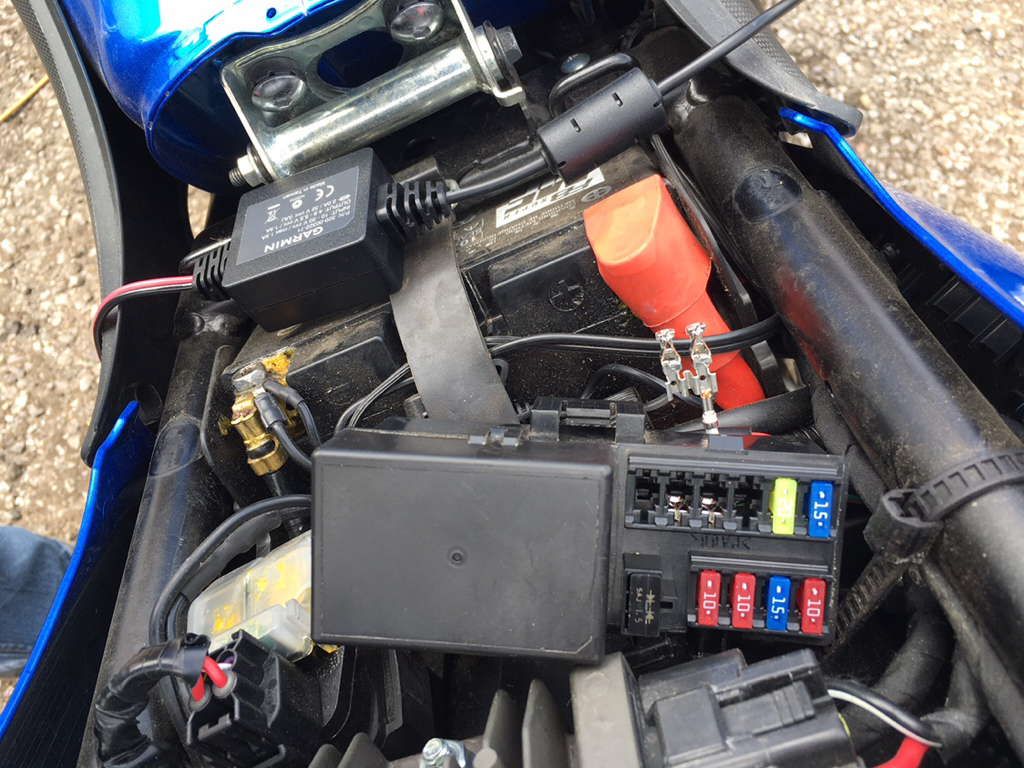 Sent from my iPhone using Tapatalk
Delboy777 likes this.
Pull my finger

Join Date: Mar 2019
Location: Elgin Moray, Scotland
Posts: 105
Mentioned: 0 Post(s)
Tagged: 0 Thread(s)
Quoted: 22 Post(s)
(Thread Starter)
Quote:
Originally Posted by Beaker View Post
Here you go. This is where I took my supply from.
Just open up the fuse box. There’s room to solder a wire onto a spare feed and add a fuse. It keeps it all neat and tidy

Sent from my iPhone using Tapatalk
Sounds like a plan to me. Apparently removing the blanking plug on the connector beside the diagnostics plug puts bike into safe mode to protect itself.
"I arrive. I see... is possible. I go fast. I WIN!" - Valentino Rossi
Last edited by Delboy777; 04-16-2019 at 02:36 PM.
Delboy777 is offline
Quote Quick Reply