I wanted to try the same but I need to get new fork springs and a new cartridge with springs is not that far away price wise.
The stock springs are progressive, starting at 0.82 kg/mm and ending at 0.89 kg/mm creating too much static sag for me (~170 lbs)

Among the front fork cartridge options I looked, most of them are standard open cartridge style (similar to stock) but with different materials, piston diameters/designs and separated fork functions (comp & rebound)
e.g. The stock is 20mm. Andreani is ~22mm, Ohlins has NIX22/NIX30 etc..


One big problem with open cartridges is cavitation (esp. on cartridges with both comp and rebound)
A very good demo about it:


The other design used heavily in racing/Motocross is the Spring/Gas pressurized closed cartridge system.
which is supposed to deal with cavitation much better and give consistent damping.
The biggest problem with this style of cartridges is you need to take them to a service center for rebuild if it's gas based.

There are very limited aftermarket pressurized cartridges on the market with Ohlins FKR, Bitubo JBH/EBH/ECH, Ktech DDS, Andreani pressurized, WP Apex pro 7500 being the options I could find. Unfortunately all these 30mm pressurized kits are very expensive, racing only and require maintenance frequently as suggested by the manufacturer (at around an year/10k miles or 10 hours of track).

Bitubo JBH (previous model ABB) seems to be an exception given it's a simpler and smaller (22mm) design has higher service intervals 20k miles.

I found a service manual for it and looks like the cartridges are closed style, with 22mm pistons and pressurized with nitrogen at 8bar.
The gas and the oil are separated by a floating piston with two rubber o-rings, similar to decarbon style rear shock. 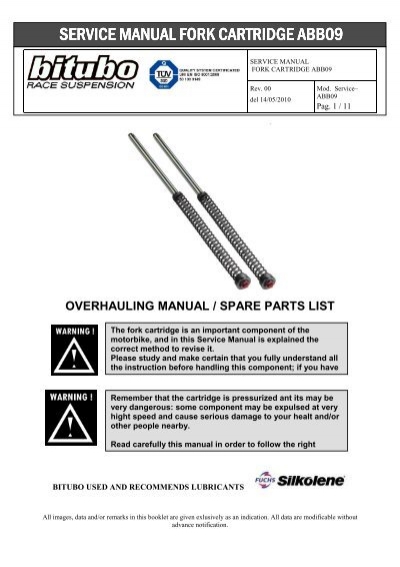 So, I've ordered a set from an Italian retailer with the correct set of springs for me at 0.9 kg/mm which came out to be ~550$ shipped.

Bitubo pressurized cartridge, adjustable in compression, rebound and spring preload. It replaces the original cartridge, without any modification.

I just received them. Will install and report the details after the ride.

· Registered
Joined May 25, 2021
·
226 Posts
I'll be interested to see how these work out for you. The OEM fork internals are average at best.

· Registered
Joined Dec 27, 2021
·
22 Posts
Funny enough I have just spent some time looking for replacements for my bike and came across this set up.
They seem to be the only ones out there that come complete and ready to install.
I will be interested to see how you get on with the installation and getting them set up and then how they feel on the road.
K

· Registered
2020 Suzuki Katana 1000
Joined 10 mo ago
·
87 Posts
I am waiting for delivery of cartridge bottom bolt copper washers. Will install this weekend.
K

· Registered
2020 Suzuki Katana 1000
Joined 10 mo ago
·
87 Posts
I have finally managed to install the cartridges and it was mostly painless except for compressing the spring to fit the fork caps in the end.
I removed the stock fork internals as per the manual with Traxxion dynamics fork cartridge toolkit and a Biltek KYB cartridge holding tool.


Initially I was worried if the fork bottoms have to be removed, but I was happy to find that the cartridges are direct drop-in.
Cartridge bottom:

Fork Inside after stock cartridge removal. (I backed out the stock compression screw)

Filled with Silkolene 02 synthetic fork oil (not provided with kit) up to 150mm as recommended.

After riding my favorite twisty, JBH with the 0.9kg/mm springs gave me a huge improvement over stock on small bump compliance.
I've tried higher compression settings as well and they don't seem to make the ride considerably harsh unlike the stock cartridge which was unusable beyond 1.75 round out of compression for me. The nitrogen gas must be helping a lot with small bumps.

I have started with recommended settings comp: 12, rebound : 12, preload: 4mm
After some testing ended up with 9 clicks out on comp, rebound and 10mm of preload which helped reduce brake dive and improved front end feel.
Lower oil level makes a lot of difference in linearity of stroke. I was able to get lower into the stroke without any harshness!

Finally the bike's front and rear suspension are at similar level and the damping feel at the front is now the same at the start of the ride (vs) after 1-2 hours of hard riding unlike the stock which would drop off after hard riding.

The cartridge damping feel is quite linear (similar to stock) unlike the XXZ31 rear shock which is clearly digressive feel with a solid piston TTx style design.
I guess the shim stack is tapered and not preloaded.

Linear damping rate is good for predictability but feels a tiny bit mushy initially during turn-in.
With a digressive rate, you can feel it when you get on the bike and move it with your feet.
The digressive firmness makes it feel like you have less parasitic spring movement energy losses.

I guess the bigger pistons in (~30mm) Bitubo EBH / Ohlins FKR cartridges would give me the firm digressive damping character I was looking for as they move more fluid similar to Showa BPF/BFF forks, but they are too much $$$$

The cartridge upgrade did not completely blow me away like the stock rear shock upgrade to Bitubo XXZ31. Shows you how bad the stock rear shock was.
Overall the upgrade is fantastic for ride quality and consistency of damping. Maybe I would have picked 0.95 kg/mm springs if I were to order again.

· Registered
Joined Dec 27, 2021
·
22 Posts
A very extensive write up, thanks for taking the trouble to detail your work so extensively.

Redlinez said:
This is why I am not a physicist. Or engineer. I think the SR71 just flew over my head.
Click to expand...

· Registered
Joined 8 mo ago
·
187 Posts
Getting ready to start buying stuff for this upgrade. Confirming the Bestek KYB tool is the "H" shaped retainer device- if so I'm assuming the retainer in the Traxxion kit doesn't fit- or are you referring to the 49mm fork cap removal tool? As to the oil, how many bottles are needed for the suggested fill level?

· Registered
2020 Suzuki Katana 1000
Joined 10 mo ago
·
87 Posts
Oops, I meant 'Biltek'. It's a cartridge holding tool.
Mind you, the length of this tool could run short, if you haven't separated out the inner/outer fork tubes while replacing the cartridge bottom bolts.
The eyelets of this tool would be inside by around an inch with the outer tube completely dropped to it's lowest position on the inner tube.
I've used a screw driver on one of the eyelets as a leverage and an Allen key at the bottom to remove the lower cartridge bolt.

This Biltek cartridge holder won't work on the Bitubo cartridge and requires a special tool
I didn't need this as the cartridge bottom bolts tightened up good and for removal I could use an impact wrench.

I've used ratchet straps for compressing the OEM stock springs.
Reused the copper washers of the bottom bolts as they still looked thick and good.

As I've said, compressing the Bitubo springs is tricky.
I've inserted a wrench on to the cartridge lock nut via the spring gap, twisted the spring till the lock nut comes out at the top.

The silkolene 02 synthetic fork oil comes in a 1 liter bottle. With both cartridges filled to ~150mm, I still have 300ml left.
You can use their Pro RSF 5w oil as well or any other one you like. The oil weight here doesn't matter as it doesn't do any damping.

· Registered
Joined 8 mo ago
·
187 Posts
Sweet! Thx I did a bunch of cross-referencing of parts in the OEM forks this morning, 2022 internals are the same as 2017- so looks like no problem with compatiblity. Will be an adventure, I've only ever been inside 80's vintage forks...

· Registered
Joined 8 mo ago
·
187 Posts
ah- working through your list; So the Biltek tool is to remove the OEM cartridge, the Bitubo 397 to install the replacement (this tool might not be needed if the bottom bolt doesn't spin the cartridge). The tricky bit is restraining springs (both OEM and Bitubo) while separating/reattaching the upper cap and cartridge body.

I see from first posts you did not have to remove the fork bottoms (which looks like it would be a bit of a pain for sure). Some other Bitubo upgrades provide replacement plugs for the fork bottom adjusters. For this upgrade I have the impression the old adjusters are left in place and have no effect?

· Registered
2020 Suzuki Katana 1000
Joined 10 mo ago
·
87 Posts
Yes. I left the old compression adjusters in place. They don't obstruct anything.
I guess, you won't even need the Biltek tool to remove the OEM cartridge as a lot of folks had success with impact wrench.

· Registered
2022 GSX-S1000GT+ blue
Joined Feb 14, 2021
·
304 Posts
After a rather "spirited" ride with my sportbike friends this weekend in the twisties, I feel the forks need more help than the rear shock/spring. It may have a lot to do with my bike not being set up for me yet. Anyone know someone knowledgeable and capable near the Raleigh NC area?

My Name Is Jeff 24 Replies